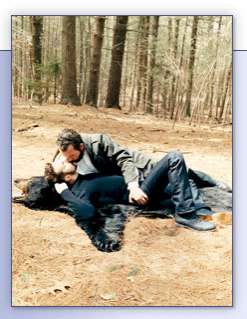 Bianca — September 2, 2009 — Marketing
References: nymag
To much controversy from its readers, Men's Vogue (dubbed 'Mogue' by some these days) has opted against running a Marc Jacobs ad campaign featuring two men (Dick Page and James Gibbs) kissing against a forest tree and kissing on a bearskin rug.

Photographer Juergen Teller was surprised that these snaps were rejected from Men's Vogue while "pretty hard-core" images of Dakota Fanning did make the presses back in 2007 when she was only 12. Teller says they were "on the border of being too much, even for me." So then why the stink over the smooching hombres? He didn't seem to get it either.

"I like the idea of having a gay couple in a men’s ad because it makes sense," Teller says. "And I wanted the ads to be like they are — very romantic, tender and sweet. I certainly didn’t want to have anything provocative, not at all."

If you're going to churn out super scandalous editorials featuring young girls in risque poses or "faux lesbianism" in haute style bibles, why the nix on gay men?
5.7
Score
Popularity
Activity
Freshness