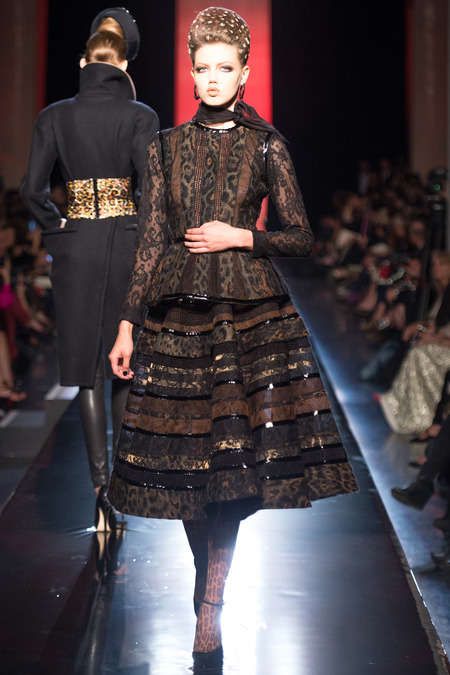 Sarah St.Jules — July 8, 2013 — Fashion
References: style
Share on Facebook Share on Twitter Share on LinkedIn Share on Pinterest
With the popularity of cats, it’s no wonder that Jean Paul Gaultier used fierce felines as his muse for his Fall/Winter 2013 couture show. The cat inspiration was a theme he used throughout an astonishing number of forty-four different looks. Even though animal print can go from fun to trashy in the matter of an accessory, Gaultier used it sparingly enough that it worked perfectly with his couture outfits.

The leopard print was seen everywhere from hats, dresses and the most common accessory, stockings. Most shockingly, some of the models (Lindsey Wixson included) had their hair leopard printed. In a runway with a lot of big hair, those printed bouffant styles stood out like a model in a jungle, and looked fabulously different. Jean Paul Gaultier not only knows how to make awe-inspiring clothes, but he also knows how to bring out the wild animal in all of us.