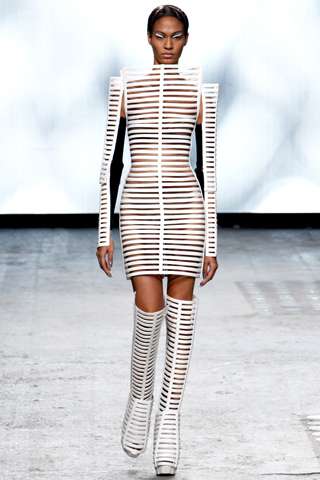 The Gareth Pugh Spring 2012 Show is Bold and Bondage-Inspired

The point is that the collection is wild, unconventional, a little bit goth-inspired and totally mesmerizing. Leave it to one of the first shows of Paris Fashion Week totally blow everyone else out of the water. New York, London and Milan have got nothing on the French.

The Gareth Pugh Spring 2012 collection opened with a video of a nude Crystal Renn thrashing about violently. The show opened with models appearing in leather cage dresses, seemingly restricting them, and closed with the models strutting down the runway as "glistening, masked insectoid hybrid[s]," as described by Style.com.

Reading more like a couture show than a ready-to-wear collection (but isn't that what's so great about Paris Fashion Week?), the Gareth Pugh Spring 2012 is one that will go down in history.
6.8
Score
Popularity
Activity
Freshness
Get Trend Hunter Dashboard