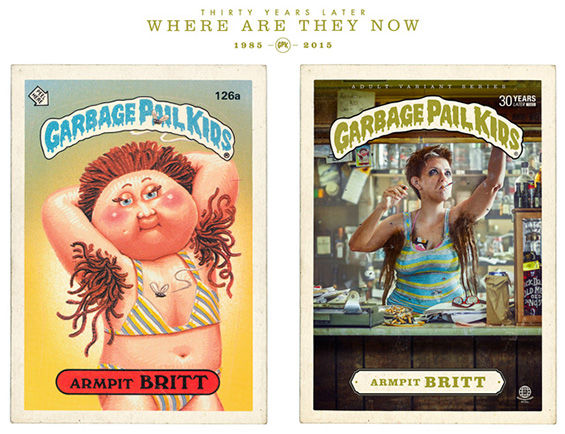 Artists Imagine the Garbage Pail Kids All Grown Up

Meghan Young — June 5, 2015 — Fashion
References: brutonstroube & beautifuldecay
Share on Facebook Share on Twitter Share on LinkedIn Share on Pinterest
The Garbage Pail Kids were a crass group of cartoon character inspired by the Cabbage Patch Kids phenomenon. Although long put aside for more modern shows and characters, two artists decided to revisit this series as a play on the common “Where are they now?” stories about child stars.

Art director Jake Houvenagle and photographer Brandon Voges decided to remake a handful of classic Garbage Pail Kids covers with what they would imagine the characters would look like not only grown up, but as real life adults. The results are quite disturbing. Beautiful Decay writes, "The artists cleverly match each Garbage Pail Kid with a suitable occupation that matches their unfortunate, gross personality trait. For example, the unholy Bony Tony, who has the ability zip off his skin, is now, thirty years later, a stripper!"
6.9
Score
Popularity
Activity
Freshness
Get Trend Hunter Dashboard