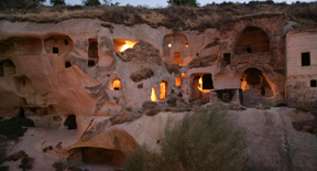 POPEYE — January 30, 2007 — World
References: gamirasu & americanwaymag
Share on Facebook Share on Twitter Share on LinkedIn Share on Pinterest
Be like Batman with a cave of your own. This is now a possibility at this cave hotel. "A cave, you probably did not imagine one as comfy as Gamirasu Cave Hotel in Ayvali Village, Cappadocia, Turkey. Originally a monastery, the hotel's 18 rooms were carved by hand from volcanic rock centuries ago. Today, they are comfy nests instead of monastic cells, complete with natural cotton futons, kilims and Turkish rugs, showers and heat. The deluxe suite has a fireplace and a balcony with views of the fanciful rock formations that dot the desert countryside. Nearby are villages of cave houses, and you can explore on horseback, donkey or bicycle. Innkeeper cousins, Ibrahim Bastutan and Suleyman Cakir. Volcanic rock called "tufa" is perfect insulation material which keeps the temperature between
17 - 20 degrees Celsius throughout the year."

38 Batmannovations
Honouring the Caped Crusader, From Meltdowns to Bike Suits