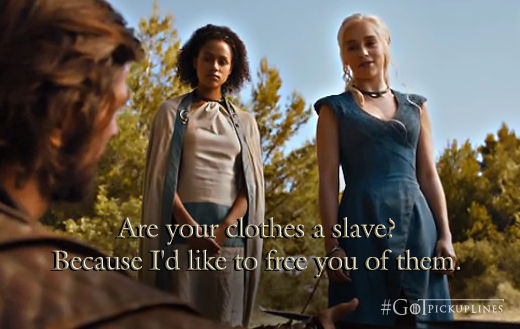 Laura McQuarrie — May 11, 2014 — Pop Culture
References: imgur & froot.nl
Share on Facebook Share on Twitter Share on LinkedIn Share on Pinterest
There's a lot of romantic action that happens on Game of Thrones, but if you're not as adept at courtship as some of the show's characters, these Game of Thrones pick-up lines could help—they may not guarantee the same kind of success, but they will make it known that you're a huge fan of the show.

Like most pick-up lines, these ones are pretty cheesy, but they're mixed with humor and a good dose of references to the show. Depending on which house you're a fan of, there's a pretty good range of lines for the picking, including ones that play off of the cruelty of Joffrey, Khaleesi's mission to free the slaves, as well as the incestuous relationship between Cersei and her brother Jaime.
6.6
Score
Popularity
Activity
Freshness
Get Better and Faster