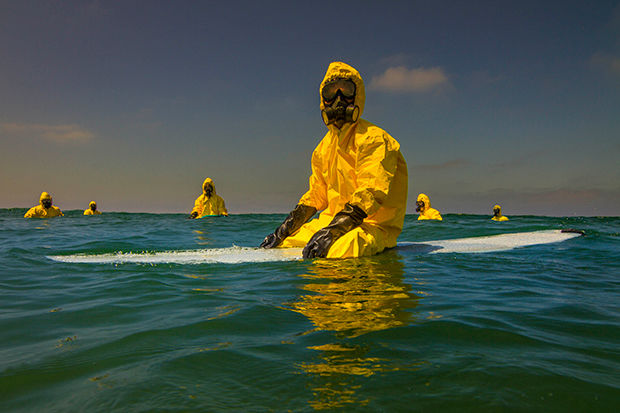 The 'HAZMAT Surfing' Series Imagines the Grim Future of Surfing

Laura McQuarrie — August 8, 2015 — Eco
References: dyrlandproductions & featureshoot
Share on Facebook Share on Twitter Share on LinkedIn Share on Pinterest
When photographer Michael Dyrland visited Los Angeles for a photoshoot, the water contaminated with sewage, garbage, oil and even human feces inspired a series on the future of surfing. Considering that entering the water could have resulted in Dyrland contracting everything from infections, respiratory conditions and Hepatitis C, it's fair to say that he pictured his visit to the seaside much differently.

This shocking trip to the American coast later became the inspiration for the photographer's 'HAZMAT Surfing' photo series. This imaginative series is set about 25 years in the future, envisioning that the water conditions have become so toxic, that full biohazard gear is required instead of a skintight bodysuit.

Dyrland expresses that "We just need to address the current issues and work together toward improving ocean pollution," and HAZMAT Surfing brings awareness to that.
6.8
Score
Popularity
Activity
Freshness
Access Advisory Services