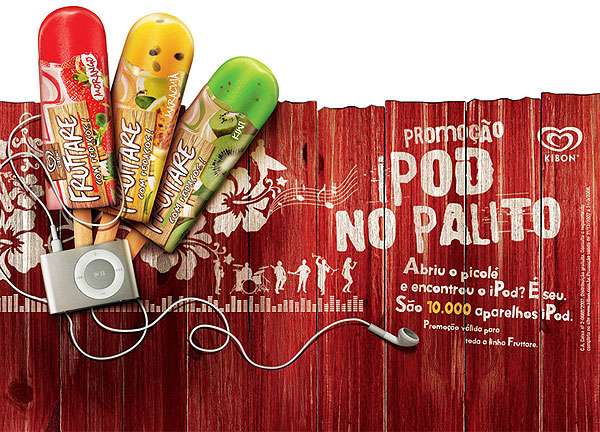 Camster M — December 14, 2007 — Tech
References: brainstorm9.br & gizmodo
Share on Facebook Share on Twitter Share on LinkedIn Share on Pinterest
Brazilian ice-cream manufacturer Kibon has redefined the cool factor in marketing and promotions. After racking their brains to come up with a new way to give away prizes (for decades they'd had prizes printed on the popsicle stick), they came up with a way to put the prize inside the frozen treat.

Not so simple when you consider the prizes to be given away: 10,000 iPod Shuffles. Bullet Brazil, the company that came up with the idea, had to find a way to protect the iPods from humidity, while keeping ice-cream lovers guessing which packages actually hid a prize inside. So they developed a look-alike, feel-alike fake ice-cream â€“ a propsicle, if you will. Apple were initially skeptical, until they saw that the prototype could protect the iPod's circuitry against temperatures of between -4 and -22 degrees Fahrenheit â€“ which is how cold a standard freezer gets. After a never-ending number of tests, Apple were convinced and green-lighted the promotion.

Now Kibon's â€œiPod no Palitoâ€ is ready to roll out on December 18, just in time for the Brazilian summer season. Consumers simply buy a Fruttare popsicle in any of its 10 flavors, and may find an iPod shuffle hidden inside, ready to play. An 800 number and a code are given to the winners, allowing them to claim the manual and the charger. They also get a free popsicle with the package, in the same flavor as the fake one.