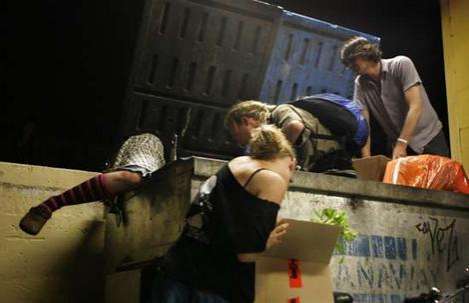 This Is The "Freegan" Life

Ben Preiss — September 13, 2007 — Lifestyle
References: lifeandhealth.guardian & latimes
Share on Facebook Share on Twitter Share on LinkedIn Share on Pinterest
A growing subculture in North America and Europe is voluntarily dropping out of consumerist society and living off of what others throw away. They call themselves â€œFreegansâ€ and some of them are former managers who became fed up with their capitalist lifestyles. Now they revel in how little money they spend, getting by mostly on things -- including food -- that they find on the street and in dumpsters.

Implications - The most unique thing about this phenomenon is that these people are not beggars, but are making the conscious choice to eat others' leftovers. Further, these particular individuals do not eat the food on the spot, but rather use it as an ingredient for an entire dish.

An example is observed in a female freegan name Nelson. Allegedly, "she thawed a slab of pate that she found three days before its expiration date in a dumpster outside a health food store. She made buttery chicken soup from another health food storeâ€™s hot buffet leftovers, which she salvaged before they were tossed into the garbage."
1.7
Score
Popularity
Activity
Freshness
Access Advisory Services