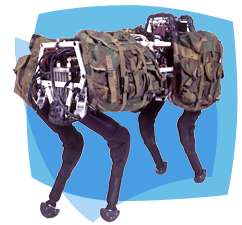 Alex Covert — August 19, 2007 — Unique
References: bdi & trendhunter
Share on Facebook Share on Twitter Share on LinkedIn Share on Pinterest
This is some of the freakiest robot video footage I've ever seen. Created by Boston Dynamics, The BigDog walks, runs, and climbs on rough terrain and carries heavy loads. I think it is so disturbing to me because it actually mimics a living organism. Initial applications would undoubtedly be military in nature. Yet more proof that robots are going to be a major part of our lives in the not-so-distant future.

Implications - Decades ago, scientists believed that by 2007, robots would be performing human tasks. Though this is not entirely false, humanoids do not walk with the human population; however, scientists are coming close as proved by pieces like this BigDog Robot.

Who knows? Maybe I can get a robot to do my homework.
2.9
Score
Popularity
Activity
Freshness
Get Trend Hunter Dashboard

A 52 Trend Salute in Honor of Remembrance and Veterans Day