The Places Where Trends Are Made (Sponsored) 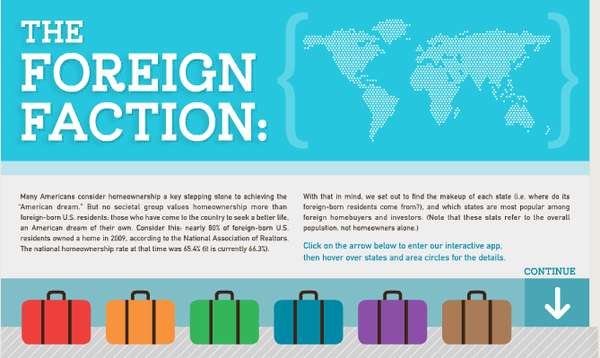 Jennifer Gosnell — June 10, 2012 — World
References: columnfivemedia
Share on Facebook Share on Twitter Share on LinkedIn Share on Pinterest
Immigration has become a huge issue on the political agenda, leading to the creation of this ‘Foreign Faction’ interactive map. It gives context to what areas are actually experiencing great leaps of immigrants, where these immigrants are coming from, and the numbers associated with their immigration state by state.

The map depicts who owns homes in these states, one of the greatest landmarks of the “American dream.” As Canada and Mexico are immediate neighbors of America, they play a huge role in the top immigrant numbers for almost every state. However, India, China, Jamaica, Haiti, Somalia, Ethiopia, Kenya, Vietnam, the Philippines and areas of trouble like Colombia and Iraq also come up quite a bit during the numerical immigration assessment.