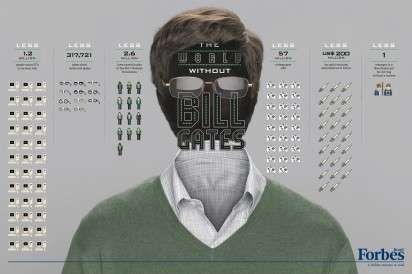 Meghan Young — May 4, 2012 — Marketing
References: ogilvy & ibelieveinadv
Share on Facebook Share on Twitter Share on LinkedIn Share on Pinterest
The Forbes Brasil campaign gives people "a billion reasons to read" this business publication. Through the use of popular infographics, it shows what the world would be like without the influence of such billionaires as Donald Trump, Eike Batista, Richard Branson, Bill Gates, Tiger Woods and Mark Zuckerberg. For instance, without Donald Trump there would be 26 less skyscrapers and 185 less people fired in reality TV shows.

Conceived and executed by Ogilvy, an ad agency based in Sao Paulo, Brazil, the Forbes Brasil campaign was art directed by Fernando Reis with creative direction by Eduardo Marques. The illustrations were done by Arthur D’áraujo while Marcelo Padoca came up with the copy and Fernando Reis created the typography. All together, the Forbes Brasil campaign is highly humorous and interestingly informative.
6.7
Score
Popularity
Activity
Freshness
View Innovation Webinars