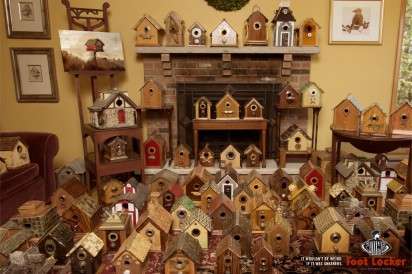 Meghan Young — July 20, 2013 — Fashion
References: bbdo & ibelieveinadv
Share on Facebook Share on Twitter Share on LinkedIn Share on Pinterest
The Footlocker Collectable Shoes ad campaign focuses on three creepy collector items: clowns, birdhouses and elephants. Although people might believe that only one out of the three fits a 'creepy status,' the sheer abundance of these themed objects elevates the other two from just plain weird. Hilariously enough, the print ads read, “It wouldn’t be weird if it was sneakers.”

Conceived and executed by the BBDO ad agency branch based in New York City, the Footlocker Collectable Shoes ad campaign was art directed by Danilo Boer and Dan Lucey with photography by Billy Siegrist. In a way, the Footlocker Collectable Shoes ad campaign celebrates individuality as much as it does footwear addictions even though it pokes fun at people's strange hobbies. At the end of the day, people will have a good chuckle.
3.1
Score
Popularity
Activity
Freshness
Attend Future Festival