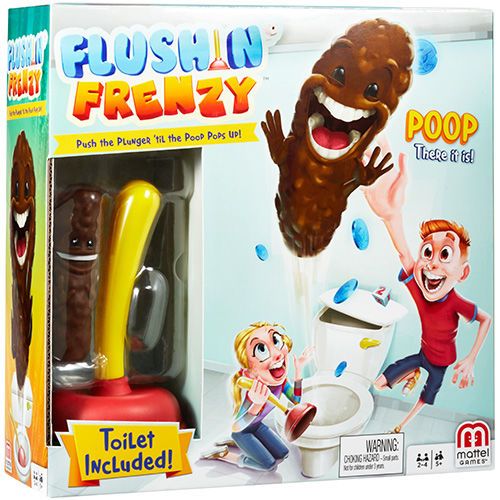 Flushin' Frenzy is a Kids Game Inspired by Plunging a Toilet

Rebecca Byers — April 14, 2019 — Life-Stages
References: mattelgames
Share on Facebook Share on Twitter Share on LinkedIn Share on Pinterest
Flushin' Frenzy is a hilarious family game that explores the less favorable moments of toilet ownership. The game, aimed at young children, involves a small toilet that players must successfully plunge in order to release a poop figurine. Players are additionally awarded points for catching the poop as it launches out of the toy toilet. Each player rolls the die to see how many plunges they get to do on their turn, with the winner being the child who has collected the most tokens for various aforementioned achievements throughout the game.

Designed for two to four players aged four and up, Flushin' Frenzy is sure to bring out the silly side of both kids and their parents. Made by Mattel Games, the gross-out game follows other such silly games as 'Who Tooted,' 'Doggie Doo,' 'Pimple Pete,' and 'Gooey Louie.'

Infrastructure-Rebuilding Board Games
Aftershock: San Francisco and Venice is Interactive