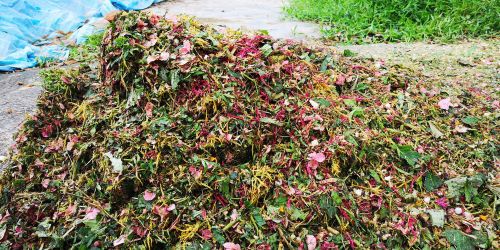 Grace Mahas — February 18, 2020 — Eco
References: vervemagazine.in & livekindly.co
Share on Facebook Share on Twitter Share on LinkedIn Share on Pinterest
Fleather, founded by former automation engineer Ankit Agarwal, offers an unusual leather alternative made from upcycled flowers. Fleather is a versatile raw material that can be used to make a variety of products including shoes, handbags, and apparel and recently won the UN Sustainability Award. Its 100 percent biodegradable and upcycles a product that would otherwise be wasted.

The new flower-based leather alternative was discovered by accident, while Agarwal was working to upcycle used flowers at Kanpur Flower Cycling Private Limited. He noticed a "dense" and "fibrous" material that had started growing out of the unused fibers that featured the same texture and appearance as leather. After studying the material, Agarwal and his team began studying the substance and realized that over a period of three weeks, the alternative leather is formed.

Fleather currently hires over 70 women from marginalized communities and hopes to increase its workforce to 5,000 women in the future.