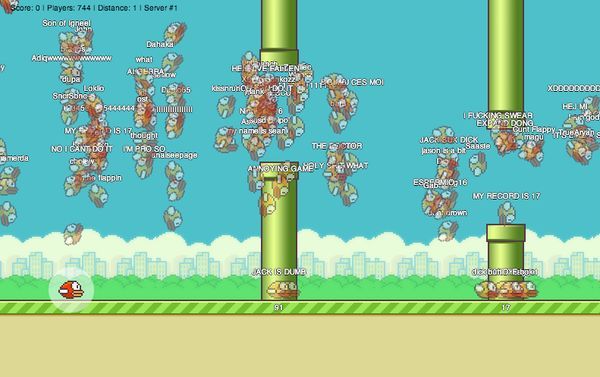 FlapMMO Makes the Flappy Bird Game Fun by Playing with Others

Laura McQuarrie — February 14, 2014 — Tech
References: flapmmo & geekosystem
Share on Facebook Share on Twitter Share on LinkedIn Share on Pinterest
Part of what made the Flappy Bird game so popular is that nobody wanted to suffer through the agony of the hard-to-play game alone. Now, among the many spoofs of the original is FlapMMO, an online version of the game that's multiplayer.

Controls for the game are just like the original, but this time, you can see others who are playing, winning and falling alongside you. Users can even specify a nickname for their own Flappy Bird, but it's nearly impossible to keep track of who's who, since there are hundreds of birds flying at once.

It's hilarious to see that there are people out there who may have just as much trouble with the game as you do, but continue to play it anyway.