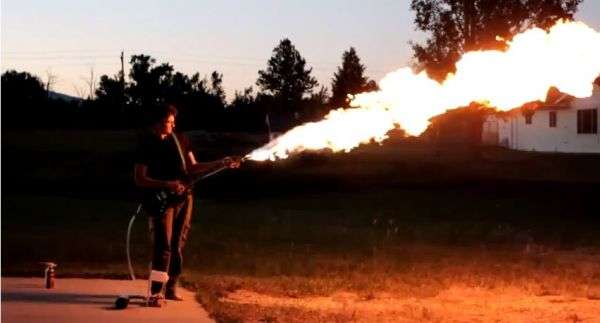 Meghan Young — August 2, 2013 — Unique
References: hackaday & neatorama
There are flamethrowers and then there are flamethrowers that have been mounted onto a guitar like the FLAMEnco guitar. Turning a person into the ultimate rock god, the FLAMEnco guitar ups the ante when it comes to stage presence. Of course, it probably wouldn't be safe to use anywhere but an open field with no one around for miles.

Created by John Springer, the FLAMEnco guitar began on a smaller scale, able to shoot a six-foot flame for about 40 seconds. Now it can produce up to 18-foot long flames colored with standard pyrotechnic supplies. Both the former and the latter would spice up any musical performance. In coming up with the FLAMEnco guitar, Springer says, "I noticed an unfortunate lack of many flamethrower guitars on the web so I filled the need."
1.2
Score
Popularity
Activity
Freshness