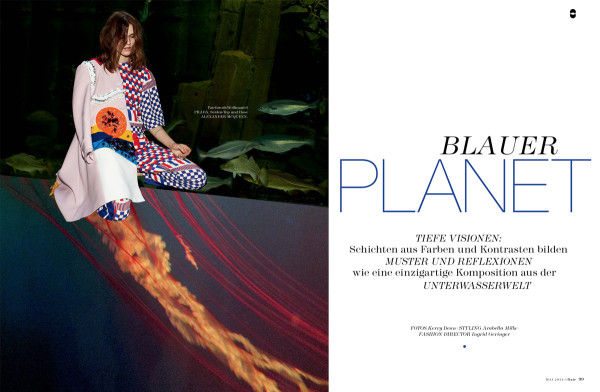 Meghan Young — May 28, 2014 — Fashion
References: flair-magazin.de & trendland
Share on Facebook Share on Twitter Share on LinkedIn Share on Pinterest
The Flair Germany May 2014 photoshoot is inspired by the alien world that resides deep in the ocean. Yet instead of venturing down to those depths like James Cameron's impressive record-breaking dive, it was shot on location of an aquarium based in Copenhagen, Denmark. Titled 'Blauer Planet,' it is named after the aquarium.

Shot by Kerry Dean, a photographer based in London, United Kingdom, the Flair Germany May 2014 editorial is a "photographic analogy between clothes and sea creatures," as put by Trendland. It stars model Emma Oak. The brunette beauty is outfitted by stylist Arabella Mills, who successfully turned her into a a frilly anemone, an incandescent jellyfish and more. The juxtaposition between marine life and high fashion is perfect for summer.
2.6
Score
Popularity
Activity
Freshness
Attend Future Festival