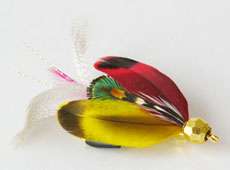 Pearl — May 22, 2008 — Art & Design
References: meboso.oht.jp & make.pingmag.jp
Share on Facebook Share on Twitter Share on LinkedIn Share on Pinterest
Kaga fishing lures are a Japanese folk art which some say embodies the samurai spirit. The featured designs are from a Japanese family firm called Meboso Hachirobei Shoten which has been in business for 430 years! Their latest craft is transforming them into wearable pieces of art in the form of jewelry.

Kaga Japanese fishing flies began their history in the Edo period. Back then, only the samurai were permitted to go ayu (river trout) fishing. So they used sewing needles which they bent and decorated with bird feathers and animal fur.

During that time long ago, people weren't allowed to train in the martial arts in public for fear of revolt, so the samurai got plenty of â€œswordâ€ practice, while fly fishing and plenty of exercise walking up and down the riverbanks. Ordinary folks were allowed to fly fish after 1868. But it is a dying art as apparently there are only eight Kaga fishing lure artisans left. However, with the switch to making fishing lure jewelry, the craft might well survive as more jewelry is sold today than actual fishing lures! They are works of art.
2.9
Score
Popularity
Activity
Freshness
View Innovation Webinars