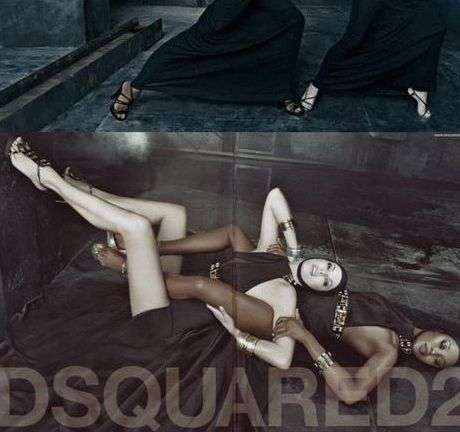 Naomi Campbell and Linda Evangelista Face Off for Dsquared2 (UPDATE)

The gorgeous combatants donned super-chic black maxis, strappy sandals and black head gear. The first image of this fashion-conscious battle, in which Naomi seemed to be getting the better of Linda, was featured on TrendHunter.com last week. The second image in the gallery, however, reveals a combative Evangelista decidedly but ever so gracefully drop-kicking Naomi.

The risque finale of this epic battle, which is showcased in the first gallery image, displays our sensual combatants patching things up in a very suggestive way. Our gladiators are captured lying on the floor in a provocative, alluring pose in which the fiery Naomi places her long legs between Linda’s equally sinuous limbs in a clear hint of physical intimacy after a furious encounter.