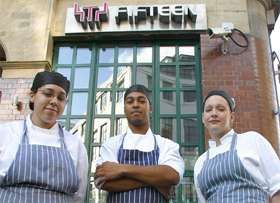 Interestingly, the name of the restaurant stems from the first 15 underprivileged youth that he trained to work in his London location in 2002. And now, each year, Oliver trains roughly 15 young people, between the ages of 18 and 24, some of whom are homeless, unemployed, and have criminal records and/or drug or abuse histories. Fifteen’s chef apprenticeship program works in collaboration with the Jamie Oliver Foundation to encourage youth that they can have successful occupations in the restaurant industry. Fifteen now has three more locations in addition to the original London, England restaurant: Amsterdam, Cornwall and Melbourne.

Fifteen Restaurant is an extraordinary example of how one person has evolved his own career into including what he loves—food—and a more general leaning toward his own social responsibility. Oliver used the proceeds from his cookbook “Cook With Jamie” to fund the Fifteen Foundation, seeing as graduating each student costs about $50,000 U.S. each.

Fifteen Restaurant doesn’t simply have a celebrity owner—patrons of the restaurant include Bill Clinton and Brad Pitt. The restaurant doesn’t attract customers on mere social good alone; its mouthwatering menu fuses Italian and Mediterranean-inspired foods made with fresh, seasonal and sustainable ingredients.

Fifteen Restaurant aims to inspire youth all over the world to have the self-confidence to achieve numerous goals regardless of any hurdles that they might have encountered in life. “Having not been the brightest banana in the bunch myself, I realised that my biggest weapon in life was the determination, enthusiasm, hands-on and ‘actions speak louder than words’ approach my father taught me, and I wanted to get this across to others, especially those interested in food, ” says Jamie Oliver on the Fifteen website. Fifteen’s apprenticeship program, and its successful restaurants show us that we can all envision a different future for ourselves, the people around us and the world as a whole.