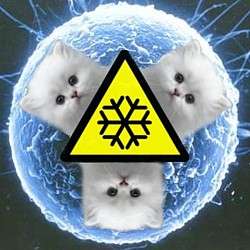 "On October 3, a team of American and Japanese researchers from the Audubon Center for Research of Endangered Species (New Orleans) and the Kato Ladies Clinic (Tokyo) announced success in producing what they are calling the world's first kittens born from the frozen egg cells of a domestic cat," Pink Tentacle reported. "Feline ova have long proved difficult to freeze properly because of their high fat content."

I just wonder what they are going to name them? Icicle, Cracked, Cube? In all seriousness, if this works it will be a way to save a lot of endangered felines on the planet, and if it works on other types of ova, then we could be on the way to repopulating some nearly extinct species.
2.2
Score
Popularity
Activity
Freshness