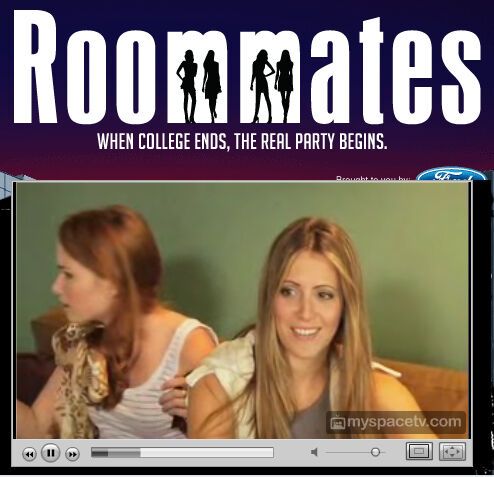 Bianca — November 29, 2007 — Pop Culture
References: myspace
Share on Facebook Share on Twitter Share on LinkedIn Share on Pinterest
There's such a surge of wannabe reality show stars and starlets that there aren't enough spots available on TV to accommodate them, which is why some have taken their shot at fame into their own hands, starting their own reality shows on MySpace. Consider Roommates, a fake reality show on MySpace about four roommates in L.A. "When college ends, the real party begins."

"This is Roommates, a new faux reality show that is getting heavy promotion on MySpace," Forbes explained. "It has the distinction of being the first series conceived by, and exclusively for, the social networking Web site. Episodes are only three minutes. Plot is mostly nonexistent, and it seems to be a ripoff of MTV's The Hills, another show about young women living a reality-nonreality conundrum in L.A."

So, is anyone actually watching their live journal?

"The series' 19 shows have garnered a combined 3.7 million views, about half of what Katie Couric gets in one night. A typical YouTube hit gets 1 million views," Forbes said.

Not bad for a cheeky glimpse into the lives of a group of average girls.

The website also lets fans download the soundtrack, some songs for free, others for $0.99. There's also a polling area on the site, today's questions is, "Do you want to see Justin and Peyton begin dating or just remain friends?" There's also a forum and section to chat about the show.

So, having your own show really isn't that hard anymore. If you've got a social network and an interesting life (the more sex and nudity, the better), finding a sponsor isn't an impossible goal.
A new episode airs every week day at 4 pm EST.
0.8
Score
Popularity
Activity
Freshness
Jeremy Gutsche Keynote Speaker