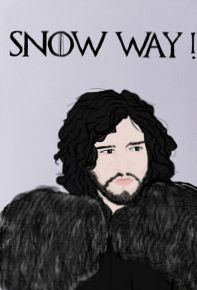 The card features an illustration of Jon Snow, arguably the most well-known character from Game of Thrones, his brow furrowed quizzically, as though he's heard some news he just can't believe. Above his head, the words "Snow Way!" are emblazoned in capital letters, confirming his incredulous expression. Maybe someone told him he's the undefeated champion of the throne? Too good to be true!

The Snow Way greeting card is a fun way to share news that you know your friends won't readily believe. Fans of the fantasy series are sure to delight in this kistchy greeting card, available at Tay Ham.
2.8
Score
Popularity
Activity
Freshness