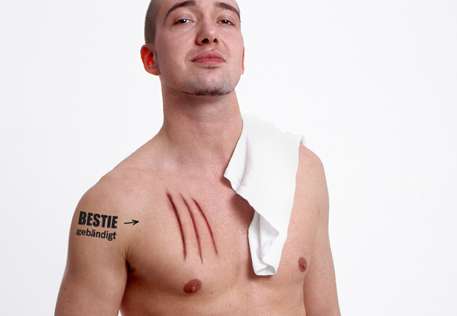 So for example, If someone takes a nasty, embarrassing spill and sustains a cut that needs stitches, they can get a tattoo claiming that they got the scar fighting off an armed robber who slashed him with a knife. I'm making stuff up here but basically, that's the gist of it. If you have a scar that you acquired in a rather pedestrian, lackluster way, no problem. You can get a Hero tattoo saying that you got the scar saving a baby's life or something like that. At the moment, Hero tattoos are only available in German. Thank goodness for that.