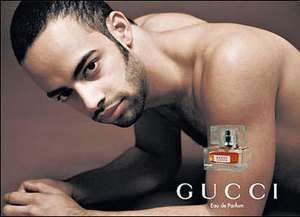 Jeremy Gutsche — May 1, 2007 — Unique
References: spiegel.de & trendhunter
Share on Facebook Share on Twitter Share on LinkedIn Share on Pinterest
In March, Trend Hunter featured a prankster who sent fake Gucci Ads of himself to a large Swiss Magazine... The magazine thought he worked for Gucci and published the ads... In a recent interview for Spiegel, the prankster's story has been made public. Apparently, this wasn't his first prank. He previously posed as a pop singer... And today, he claims to have a modeling career, launched by his publicity stunt.

Implications - Prankster Juan Isidro Casilla has trumped the advertising system with his fake Gucci ad he managed to have published in the paper. Before it was revealed as a stunt, the ad was printed on a full double-page spread which had his naked torso on display advertising the brand's perfume.
6
Score
Popularity
Activity
Freshness
Get Better and Faster