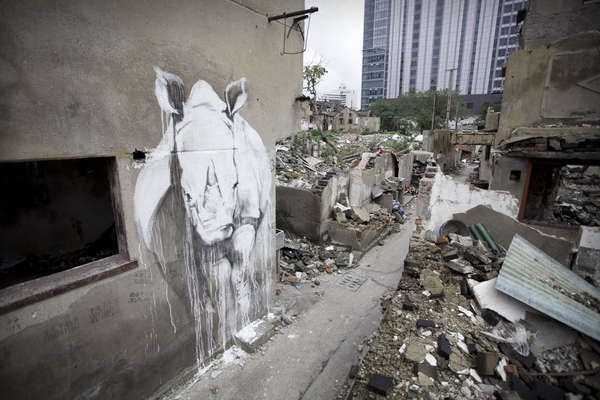 Faith47's 'The Taming of the Beasts' Reprimands Rhino Slaughter

Jordy E — September 20, 2012 — Art & Design
References: woostercollective & good.is
Share on Facebook Share on Twitter Share on LinkedIn Share on Pinterest
An artist who identifies herself only as 'Faith47' recently erected a controversial mural in Shanghai titled 'The Taming of the Beasts.' The bleeding picture of large rhinos drips down the side of a cement wall, a testament to the devastation that she stands opposed to.

Faith47, along with a laudable group of animal rights activists, draws attention to the recent execution of rhinos in South Africa, China, Malaysia, India, South Korea and Vietnam. The widespread killings have resulted in extinction with the 2011 annihilation of the Javan rhino in Vietnam, a travesty that was soon after accompanied by the elimination of the West African Black Rhino.

The Taming of the Beasts lays blame on the Asian hunting culture which has made a sport and relative spectacle of the search for rhino horns.
1.8
Score
Popularity
Activity
Freshness
Get the 2021 Trend Report FREE