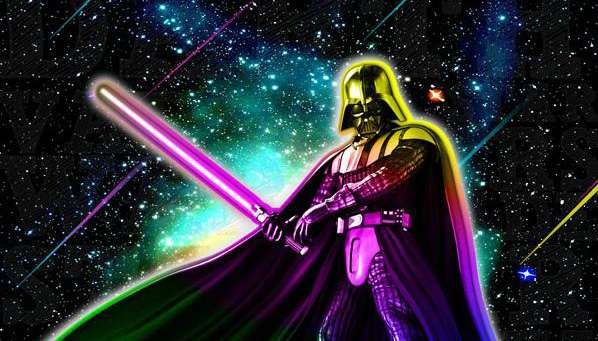 Jason Soy — March 18, 2012 — Pop Culture
References: urbanarts.br & lacarpa.tumblr
Share on Facebook Share on Twitter Share on LinkedIn Share on Pinterest
If you’ve ever wondered what Darth Vader would look like at a dance party, these Fabricio Moura creations may be the closest you’ll get to answering that query. Depicting the fallen Jedi in neon colors evocative of a club dance floor, these cosmic posters are more eye-catching than a double rainbow. R2-D2 gets a similar treatment from Fabricio Moura, and together, the two prismatic illustrations make an inventive art set that should really be turned into a full-blown series.

Fabricio Moura depicts the two iconic Star Wars characters amid a sea of stars, with polychromatic comet tails flying about in the background. Those with keen eyes will also spot faint text behind Darth Vader and R2-D2, which reads the sci-fi villain and sidekick’s names respectively, as well as their film’s title.