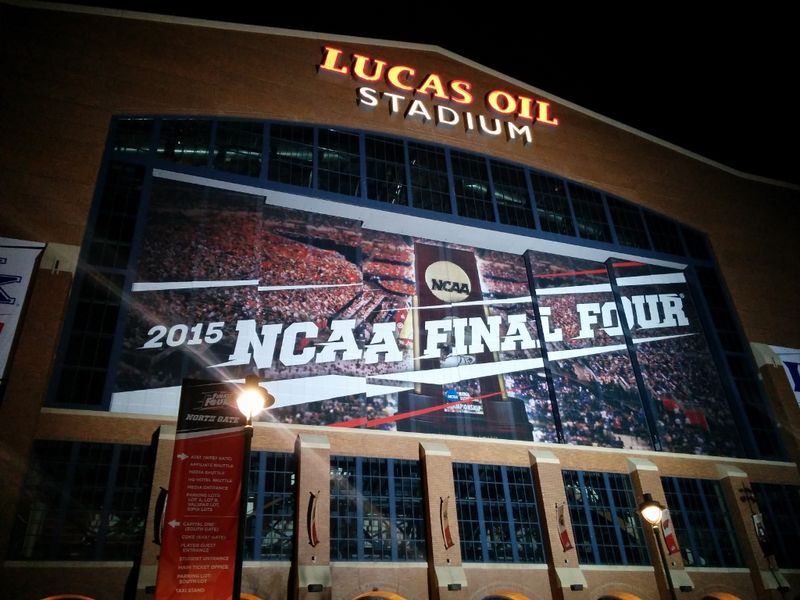 Derek Cohen — April 14, 2015 — Lifestyle
References: buick & facebook
Share on Facebook Share on Twitter Share on LinkedIn Share on Pinterest
For the second part of the year-long #ExperinceBuick program, I was invited by Buick to attend the NCAA Final Four event in roaring Indianapolis, which was nothing short of an amazing adventure. For context, I’m a huge basketball fan. I spend way too much time organizing my NBA fantasy squad every year (my poor performance is not for lack of effort) and March Madness generally brings about a sort of relief to my fantasy woes.

For those who don't know, the NCAA March Madness basketball tournament is an exciting few weeks packed with "one and done" games where even the most under of dogs has a fighter’s chance. I generally start the tournament out knowing nothing but the top few NBA prospects for next year and by the end I’ve bandwagon’d hard for a tournament darling. For anyone who filled out a bracket this year, that was undoubtedly a very hungry Wisconsin squad.

Before the games there was Indianapolis. When I arrived and had some time to walk around I found the downtown serene and breezy with low buildings and some inspiring war monuments. A tour guide called it “A city out, not up” and it showed with a core covering quite a distance and lots of new construction revitalizing the area around it. It became very clear how capable Indianapolis is to host an event of this magnitude when the throng started to rush to Lucas Oil Stadium. With an attendance three times the size of my local Toronto Raptor’s Air Canada Center capacity, the crowd was impressive to say the least. With a proud and rich collegiate and professional basketball history, there’s no city better suited to host the NCAA Final Four.

As part of #ExperienceBuick, I, along with the other invited bloggers, was treated to some incredible insider events: a live Journey concert, a private tasting at the Tomlinson Tap Room (Indiana’s premier craft beer bar) and a delicious dinner at Spoke and Steele (by far the favorite eating experience by group consensus) to name a few. I also got to check out Buick’s setup for the fan convention. After losing a close game of BracketBall to Mike Conrad from Gotta Have Gadget, I attempted to play a little one-on-one on the full sized Buick court. Quickly realizing that I’m 3 years out from having participated in any real physical activity, I hit the bench for a breather. In what was probably my favorite experience of the weekend, Buick scheduled us for a tour the stadium, locker rooms and even a little time on the actual court that would host the final games. Thirty or so attempts in, I finally made a three pointer and lifted the championship trophy for a victory photo-op.

One game was a blowout (sorry Michigan) the other two were very close contests. Though my bracket read Kentucky at the top, for the final game most of our crew fell in with Laurie Leopold from Clementine Daily, a native Wisconsinite. A few of us were adorned with Badger red t-shirts for one of the most hotly contested championship games in recent NCAA memory. I’d be lying if I said I wasn’t a little heartbroken when the whistle blew. Duke played a great game, I was beaming ear-to-ear just to have witnessed it.

The city was bustling, the games were a thrill. Being chauffeured around in the new Buick Encore was an extra cherry on top. I can’t thank the Buick team enough for the amazing opportunity. We can't wait to continue the #ExperienceBuick program this year.