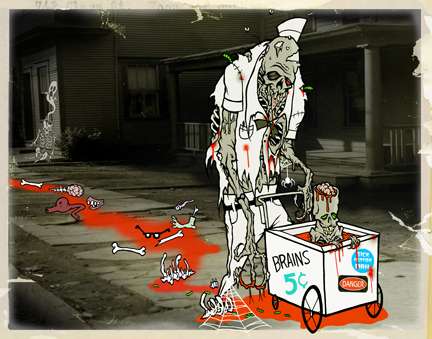 John Charles — March 20, 2011 — Art & Design
References: toxictoons & toxictoons
Eric Pigors began as an animator for Disney who worked on such films as 'The Lion King' and 'The Little Mermaid.' Then something happened, and Pigors draws Frankenstein-like creatures and ghostly curvaceous women under his Toxic Toons brand.

Eric Pigors is like the love child of Gahan Wilson, Charles Addams, Edward Gorey, 'Big Daddy' Ed Roth and Rob Zombie. His art is both shocking and loveable at the same time. It's been made into toys, tattoo flash, limited-edition prints, t-shirts, hoodies, baby clothes, stickers, greeting cards and a new line of collector's masks. It seems that the only consumer goods missing the Pigors touch is a breakfast cereal and a line of evil dog toys. If the Pigors empire keeps expanding, its just a matter of time.
2.7
Score
Popularity
Activity
Freshness