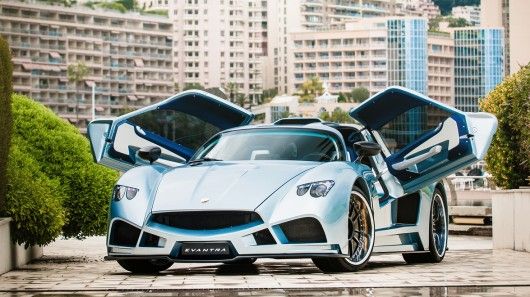 The Mazzanti Evantra is a Fast, Bulky and Ultra-Exclusive Car

Rahul Kalvapalle — May 14, 2014 — Autos
References: mazzantiautomobili.it & gizmag
Share on Facebook Share on Twitter Share on LinkedIn Share on Pinterest
Italian carmaker Mazzanti Automobili unveiled the latest iteration of its Evantra, an aggressive-looking supercar that is testament to Mazzanti’s understated experience and expertise with Italian sports cars. Mazzanti was heavily involved in restoring Ferraris and Maseratis for decades, and the new Evantra is a nod to classic Italian sports cars while also sporting a modern, aggressive look and feel. The most eye-catching design feature of the car is its ‘suicide door’ design, which sees the doors hinged at the rear instead of the front.

The vehicle has a 701-horsepower, 7.0-liter V8 engine hooked up to a six-speed sequential transmission. This set-up enables the car to go from zero to 100 km/h in just 3.2 seconds, while its top speed is a breezy 350 km/h. High-performance front and rear tires support the bulky vehicle on the road.

The Evantra hasn’t yet been released but once it is, don’t expect to see too many around—Mazzanti plans to build only five specimens a year. This car truly is an exclusive indulgence.