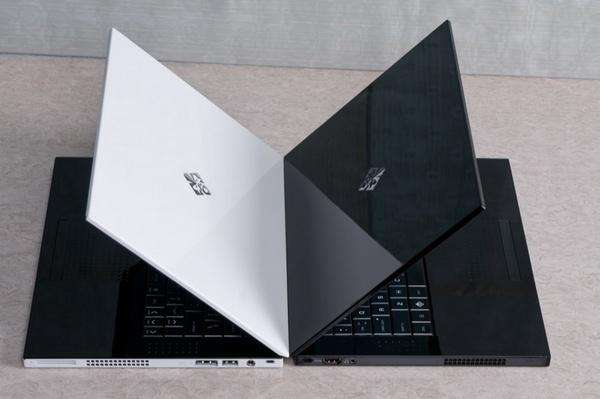 Ayman — June 11, 2008 — Tech
References: engadget & engadget
Share on Facebook Share on Twitter Share on LinkedIn Share on Pinterest
The carbon-fiber Envy 133 by Voodoo will provide some serious competition for Apple's MacBook Air and Lenovo's X300. I have to say that even though I am a big Apple fanboy, I would surely go for the Envy if I were looking to buy an ultra portable notebook.

Voodoo computers are known to be very pricey, but the Envy comes with a surprising price tag of $2,099 (which is much more attractive than X300's $2,700 to $3,000) thanks to their collaboration with HP and Intel.

Ok, so let's get to the showdown. The 13.3â€ Envy weighs 3.37 pounds, which is a bit more than the Air and x300, but measures a consistent 0.70â€ thin compared to the variable X300's 0.73 to 0.92-inches and air's 0.16 to 0.76-inches. Envy one-ups air with two USB ports (still one short of x300), with one of them doubling as eSATA as well. The DVD drive is external, just like the Air, but the Envy solves the Ethernet problem by integrating it into the power brick in a Voodoo patented design.

Available in strikingly sharp black or white, the Envy features a LED-backlit display with a light sensor that adjusts to the brightness of the room, a back-lit keyboard with an auto-toggle that automatically senses when your hands are over it, a â€œmultiple gestureâ€ touchpad, 1,280 x 800 resolution, Intel GMA X3100 graphics, and 1.8GHz Intel Core 2 Duo SP7700 processor.

However, the most attractive feature for me is the instant-on Voodoo IOS mode that enables you to surf the web, chat, access music and photos, and even make Skype calls within 5 seconds without having to boot into Windows Vista. Another practical bonus feature is that your Envy can double as a WiFi access point.

When all is said and done, the Envy presents an attractive portable option that trumps the Air's features at a much lower price than the slightly more powerful X300.

Check out the showdown between X300 and MacBook Air a couple of months ago when they were the only two battling it out:

29 Cutting Edge Laptops and Notebooks Worth Fighting For