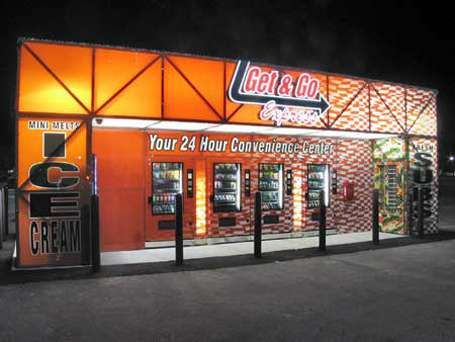 Jeremy Gutsche — September 25, 2006 — Business
References: kioskmarketplace & coolbusinessideas
Share on Facebook Share on Twitter Share on LinkedIn Share on Pinterest
A new store in Florida, Calling Get & Go, takes automation to a whole new level. Instead of employees, the entire store is serviced by a set of automated kiosks. The structure requires less space than a traditional store, less money to operate, and yes, less people.

From Kiosk Marketplace:
Calling Get & Go Express an â€œunmanned c-storeâ€ might be a bit misleading. It not only doesn't have a staff, but the goods are all stocked in machines facing outward. What's more, it doesn't have tobacco, alcohol, gas or lotto tickets â€” c-store staples. And its profit margins are even more distinct from its traditional cousin.

Founder Jeff Parsons is building the chain on a simple idea. He realized removing the employees would widen margins to the point that it was feasible, even without the traditional high-margin items that require employees to verify age. And he's augmenting his efforts with kiosk technology: deploying DVD rental kiosks and ATMs in the mix.

â€œWhen you talk about margins, right now across the board, we're running at 60-62 percent profit margins,â€ Parsons said, comparing them to the 30-40 percent margins of a regular c-store.
4.8
Score
Popularity
Activity
Freshness
View Innovation Webinars