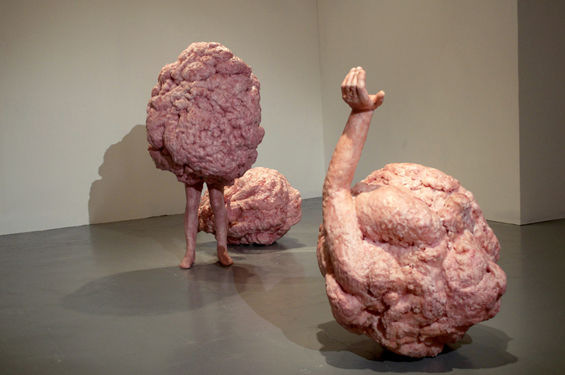 The Embrace the Base Exhibit Pays Tribute to Greenham Common Protests

Meghan Young — February 13, 2014 — Art & Design
References: andreahasler & beautifuldecay
Share on Facebook Share on Twitter Share on LinkedIn Share on Pinterest
It might be hard to imagine how the Embrace the Base exhibit pays tribute to the the longest women’s protest against a site storing nuclear weapons in the early 1980s, which was held at Greenham Common in Berkshire, England, but it does. The grotesque fleshiness of the sculptures aside, the tent resembles the ones those women erected in their camp. The artist depicts them "as the container for emotions, and 'humanise' these elements to create emotional surfaces."

Created by Andrea Hasler, an artist born in Zurich, Switzerland, and based in London, England, the Embrace the Base exhibit is reminiscent of her previous creations, which happen to revolve around meaty motifs. Embrace the Base is on view until April 11, 2014.
1.2
Score
Popularity
Activity
Freshness
Get Better and Faster