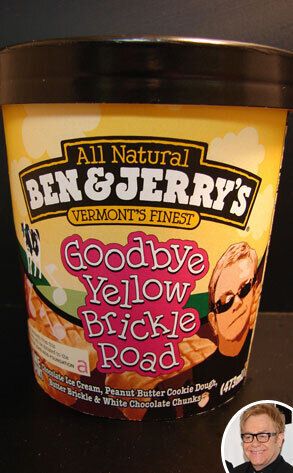 Goodbye Yellow Brickle Road will be available at Vermont Scoop Shops for just one week only, July 18-25, as a celebration of Elton's first concert in Vermont, the home town of Ben & Jerry's Ice Cream. Vermont is also the last American state that Elton has yet to perform in.

"I can't think of a more fun way to celebrate playing my 50th state, Vermont, than having Ben & Jerry's create a special ice cream, Goodbye Yellow Brickle Road, with all my favorite flavors and ingredients," John said. "I'm especially pleased that they will be donating the proceeds to the Elton John AIDS Foundation."

Ok, so what would this flavor taste like? People Magazine notes that the ice cream will be decidedly Elton, "An outrageous symphony of decadent chocolate ice cream, peanut butter cookie dough, butter brickle and white chocolate chunks."