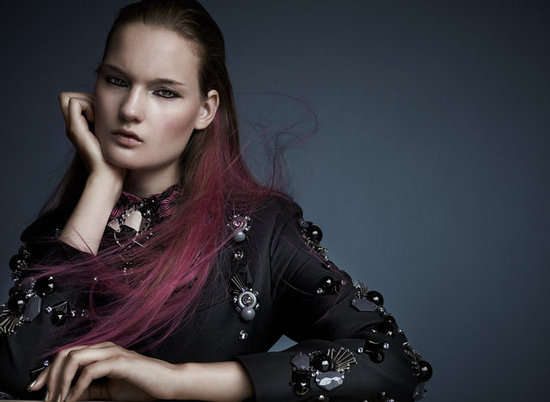 Meghan Young — September 26, 2012 — Fashion
References: elle.se & latestfashioneditorials
The Elle Sweden October 2012 editorial is filled with dark and edgy looks that are slightly brightened up by the model's fuchsia-tipped hair. Perfect for the fall and winter season, the ensembles may revolve around a somber palette, but if one looks closely, jewel-tones and textures abound.

Shot by photographer Peter Gehrke, the Elle Sweden October 2012 editorial was captured both in studio and on location. It stars model Kirsi Pyrhonen. The Finnish beauty was styled by Lisa Lindqwister, who played with everything from knitted sweaters and emerald pants to embellished purses and retro-chic pant suits. Pyrhonen stares moodily into the camera as she showcases the stellar ensembles. The looks were perfected with a half-up hairdo and a flawless face.
4.8
Score
Popularity
Activity
Freshness