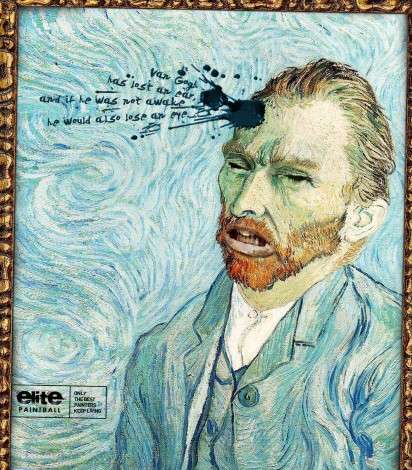 Meghan Young — November 2, 2011 — Marketing
References: elitepaintball.ie & ibelieveinadv
Share on Facebook Share on Twitter Share on LinkedIn Share on Pinterest
The Elite Paintball ad campaign pits deadly paintballers against a couple of the most famous portraits to ever roam the earth. By putting these paintballers in the same league as these iconic figures, this campaign gives much more finesse to the sport of paintballing than previously imagined.

Conceived and executed by Brazil-based ad agencies Festo and Cascavel/PR, the Elite Paintball ad campaign is clever. With the tagline, "Only the best players keep living," Elite Paintball encourages people to make their target a masterpiece. Although art aficionados may not be too impressed with the campaign, it certainly makes one think of these famous pieces in a whole new light.

Fun and playful, the Elite Paintball ad campaign gets the message across while not taking itself too seriously, just like the game of paintball itself.
3.2
Score
Popularity
Activity
Freshness
Jeremy Gutsche Keynote Speaker