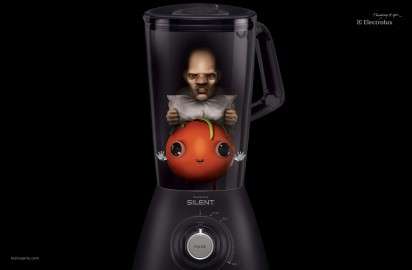 Meghan Young — April 18, 2013 — Marketing
References: ibelieveinadv
The Electrolux Powermix Silent campaign paints a rather hilarious scenario despite the danger that is also present. The vegetables depicted in print ads have been cartoonishly illustrated with big innocent eyes to show how naive they are. In the meantime, assassins await in the dark to kill them quietly.

Humorously conceived by Revolution, an ad agency based in Brazil, the Electrolux Powermix Silent campaign will have people exclaiming in sympathy while trying to mask their smirks. Edson Rosa headed the project with the help of creative director and copy writer Emerson Braga as well as illustrator Leonardo Pinho.

Totally unexpected, the Electrolux Powermix Silent campaign plays on people's imaginations. Next time they turn on their Electrolux blender, they will feel like the sneaky assassins themselves.
2.2
Score
Popularity
Activity
Freshness