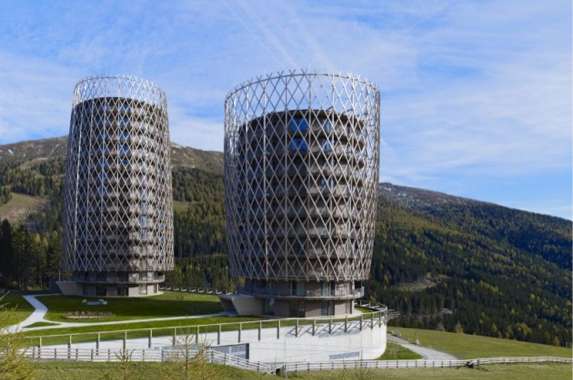 Amelia Roblin — March 11, 2011 — Eco
References: matteothun & contemporist
Share on Facebook Share on Twitter Share on LinkedIn Share on Pinterest
Existing amidst such immaculate nature is a privilege, and the Edel:Weiss by Matteo Thun is an architectural masterpiece that embraces the idea of containing man's impact on the environment. Situated at the peak of the Katschberg Alpline Pass in Austria, the project was built to serve the local ski resort. In an attempt to limit the infrastructural sprawl across the picturesque landscape, the designer built these two apartment towers upwards, and connected them effectively to an existing road.

Constructed with local materials, the condos are clad with a latticed network of wooden beams, giving the structures a caged appearance. Using pure geometries to mimic the natural motifs of the tall trees, Edel:Weiss by Matteo Thun embraces its setting and complements it with contemporary architectural spirit.
1.6
Score
Popularity
Activity
Freshness
View Innovation Webinars