"I AM A Plastic Bag" Tote
Next
Set of
Related
Ideas 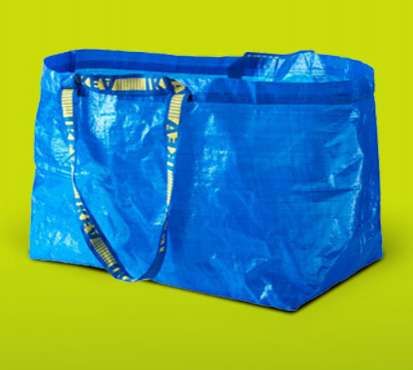 IKEA's eco-friendly initiative has been a long time coming, with the Swedish king of flat-pack furniture encouraging customers to bring their own, or pay $1 for their giant (and I do mean enormous) branded, reusable, highly durable, Ikea Blue Bags instead.

In October 2007, IKEA Canada started IKEA's Bag the Bag program, which involved charging customers 5 cents (proceeds went to Tree Canada) for every plastic bag, similar to the way much of Europe's stores have done for the last decade or so.

"The project was an enormous success, seeing a 90% reduction in the use of plastic bags in only six months," an IKEA Canada email said.

Starting July 1, 2009 IKEA Canada will no longer offer single use plastic bags, so make sure to BYOBB (bring your own Blue Bag)!
1.3
Score
Popularity
Activity
Freshness
Get Trend Hunter Dashboard