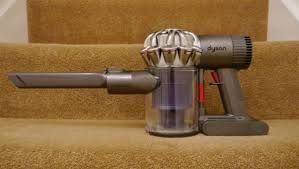 Michael Baxter — January 20, 2014 — Lifestyle
References: dyson.au & mashable
If I told you holding the Dyson DC59 in your hands was the equivalent of holding five Ferraris, would you believe me? The new offering from Dyson is so powerful that it's actually stronger than a race car.

Dyson messed around for a little bit with other projects such as space heaters, but the brand is back to its main attraction, vacuum cleaners. The new lighter model performs amazingly around corners due to its ergonomically designed brush at the end. The Dyson DC59 managed to get lighter while also increasing battery power and raw power by 50%.

The motor rotates at 110,000 rpm which is five times faster than your average race car and there is a lot more carbon fiber to the design, which is also typical of race-ready vehicles. Tough stains beware!
2
Score
Popularity
Activity
Freshness