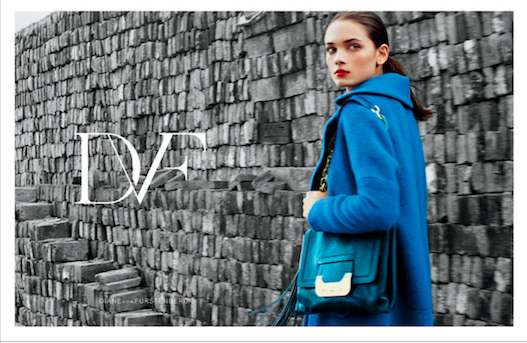 Corinne Guirgis — August 9, 2011 — Fashion
References: DVF & facebook
Share on Facebook Share on Twitter Share on LinkedIn Share on Pinterest
Fashionistas, get ready for the eye-catching DVF Fall 2011 Campaign, which is set to stand out thanks to both the fashion-forward and tech-savvy thinking of the designer. Marrying art an technology, Von Furstenburg collaborated with Shanghai studio Zhang Huan for the incredible backdrop, which was created using state-of-the-art RED camera technology, which has recognizably been used in films like Spiderman, The Hobbit and Avatar.

Lensed by Tatiana von Furstenberg and starring rising star model Tayane Leao, the campaign features the designer's fresh fall designs with bright colors like pacific blues and pomegranate reds juxtaposed against the bland concerete stone and brick that bring out the true impact of the designs. The campaign maintains an air of sophistication and elegance throughout that all women aspire to, and is keeping fashionistas excited for the upcoming season!

Implications - Technology's growing capacities are influencing a variety of industries from fashion to music to art. All of these industries are undergoing fundamental design changes which appeal to the tech-savvy generation of consumers who are accustomed to increasingly complex computer generated imagery.
4.6
Score
Popularity
Activity
Freshness
Jeremy Gutsche Keynote Speaker