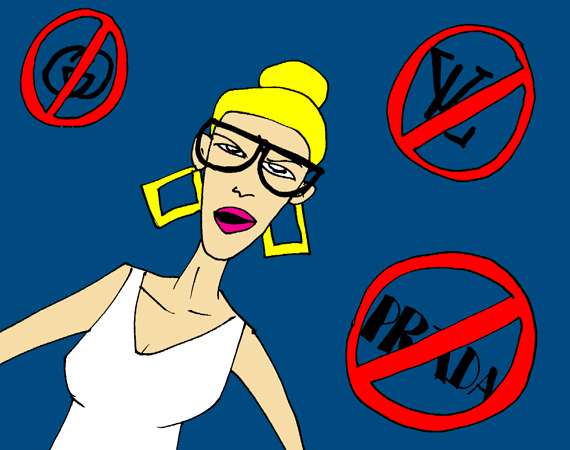 Jordan Sowunmi — July 8, 2011 — Pop Culture
References: dustinland.wordpress & read.mtvhive
Share on Facebook Share on Twitter Share on LinkedIn Share on Pinterest
The Dustin Glick Kreayshawn 'Gucci Gucci' animated parody takes a comedic and colorful look at one of the biggest viral hits of 2011. For the uninitiated, Kreayshawn is a 22-year-old Oakland rapper whose anti-consumerist ode 'Gucci Gucci' received over a million views in less than 10 days (and now sits at nearly five million), and led to a lucrative record deal with Columbia.

The Dustin Glick Kreayshawn 'Gucci Gucci' animated parody shows a visual representation of some of the songs' key lyrics. Glick, a talented writer/artist/cartoonist, is well-known for his ability to create hilarious comics based on different pop culture tropes, and this may be his finest work.

My suggestion is you boot up the song on YouTube, watch the video once, and then play the song again while you go through our collection of animated images based on the song. See how many of the visual representations you can pick up after one listen.

Implications - There are few ways a company can better connect with young consumers than by parodying a popular Internet meme. By viewing a viral topic through a satirical and timely lens, the company shows that it has its finger on the pulse of contemporary pop culture, and a brazen sense of humor. This creates a connection with consumers who like to think of themselves in the same way.
5.2
Score
Popularity
Activity
Freshness
Get Better and Faster