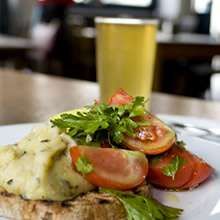 The Duke of Cambridge Serves Organic and Local Foods

Tiana Reid — October 8, 2010 — Social Good
References: dukeorganic
Share on Facebook Share on Twitter Share on LinkedIn Share on Pinterest
When you think of a British pub, maybe the first thing that comes to mind is fish and chips and pints of beer. However, the Duke of Cambridge gastropub is an unconventional take on both business practices and eating. Since 1998, this pub has been a leading sustainable and ethical business and restaurant in the United Kingdom.

What can you expect from an evening at the Duke of Cambridge? For one, they use organic, local, fair trade and sustainable foods wherever possible. As the U.K.‘s only gastropub certified by the Soil Association, they willingly adhere to some strict environmental rules. For instance, absolutely nothing is airfreighted in order to ensure a low carbon footprint. The beer is either brewed in London, or as close as it gets to the city. Their meat is provided by small farms that respect animal welfare.

With that said, the Duke of Cambridge hasn’t achieved success on environmental and ethical practice alone. “Everything is equally fantastic at this homely but spacious Islington Modern Brit that offers an all-organic extravaganza of food and wine,” read the 2008 Zagat Survey of London Restaurants. Their menu is changed twice daily in accordance to what’s in season. Described on their website as “hearty, rustic British food with Mediterranean influences,” their dining choices use the freshest ingredients in order to ensure a spectacular culinary experience. For fall, think beetroot salad, squash risotto and mutton stew. For summer, think asparagus salad, rack of lamb and gazpacho. If you’re interested in recreating their delicious menu at home, you can with “Geetie’s Cookbook” from the kitchens of the Duke of Cambridge.

It’s no surprise that the Duke of Cambridge has won numerous awards, including the 2010 Sustainable City Award, the 2009 ‘London Dining Pub of the Year’ from the Good Pub Guide, the 2008 ‘Impact on London by a small business’ winner from the Business in the Community Awards and the 2008 Winner for ‘Waste Minimisation’ from the 2008 Islington Giant Green Environmental Awards.

Part of Duke of Cambridge’s success is thanks to its commitment to impacting social change. As part of its philosophy, the business treats staff and producers with respect, incorporates a democratic style of management, supports independent producers rather than multinationals, and builds vital relationships with the community in order to support sustainability on multiple fronts.