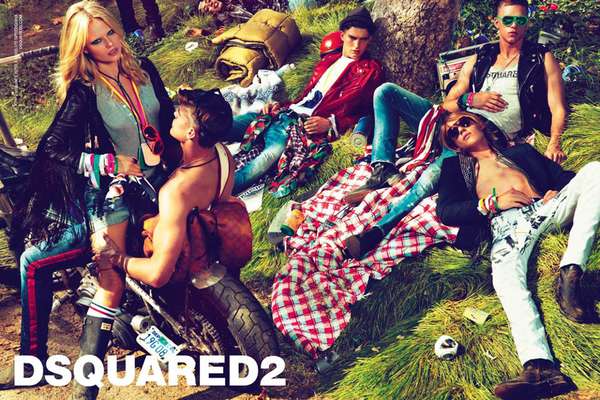 Meghan Young — December 26, 2011 — Marketing
References: dsquared2 & fashiongonerogue
Share on Facebook Share on Twitter Share on LinkedIn Share on Pinterest
Come springtime, every man, woman and child is thinking about shedding the heavy layers of clothes in order to enjoy the outdoors to its fullest, and that is exactly the feeling that the DSquared2 Spring 2012 campaign captures. With the warmer weather and sunnier days, people’s fashion choices immediately take a turn for looks that combine both fashion and function together instead of one or the other.

Shot by dynamic photography duo Mert & Marcus, the DSquared2 Spring 2012 campaign stars a sultry yet outdoorsy Natasha Poly alongside male models Dimitri Tanner, Paolo Anchisi, Matt Woodhouse and Ton Heukels. All of them are on a rather steamy camping trip in which the main attraction is the very stylish Poly. Saturated in color, the campaign relies on the promise of better weather.
2.5
Score
Popularity
Activity
Freshness
View Innovation Webinars