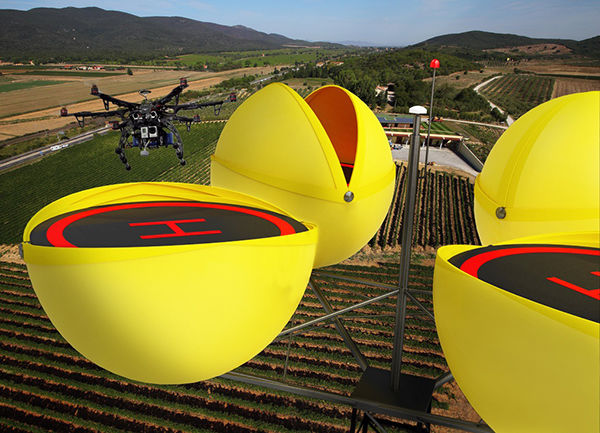 Pylons Dronairports Would Serve as Charging Stations and Safe Storage

Amelia Roblin — January 8, 2015 — Autos
References: behance.net & yankodesign
Share on Facebook Share on Twitter Share on LinkedIn Share on Pinterest
As the development of autonomous flying robots progresses, there will be great benefits to drone docks. This particular concept was designed by Federico Bruni and Joe Sardo, providing a place for drones to settle in during bad weather and between tasks.

Dreamed up as ball-shaped capsules, these so-called Pylons Dronairports would open up into semi-spheres to reveal landing pads, and close up their hoods to become protective globes when occupied. On these surfaces, the droids may be able to recharge their batteries, and certainly to get shelter from high winds, rain and snow. They could be programmed to return to the same pod each time, or to distribute themselves according to a particular system. These drone docs would be compact enough to be conveniently placed just about anywhere, with a logical spot being building tops.
6.9
Score
Popularity
Activity
Freshness
Attend Future Festival