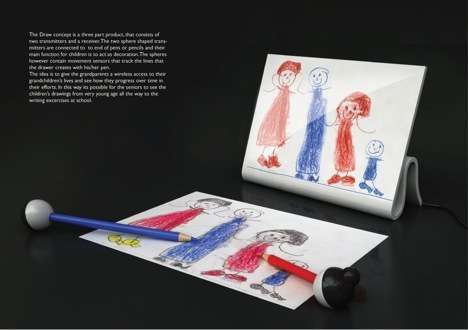 The Draw Project Bridges the Gap Between Young and Old

Meghan Young — August 29, 2011 — Art & Design
References: core77
Share on Facebook Share on Twitter Share on LinkedIn Share on Pinterest
It can often be tough for different generations to communicate with each other; therefore, a design such as that seen in the Draw Project can yield some relief to those who struggle most, or those who simply want an easier way to communicate with older or younger people. By removing differences in vocabulary, perspective, expressions and more, the Draw Project relies on natural communication tools between the young and the elderly.

Conceived by Arttu-Matti Immonen, a student at the Kyoto Institute of Technology, the Draw Project won first place in the Student Notable category for the Core 77 Design Award 2011. The Draw Project relies specifically on the integration of wireless technology in simple activities such as drawing to bridge the gap between children and their distant, older relatives.
0.6
Score
Popularity
Activity
Freshness
Get the 2023 Trend Report FREE