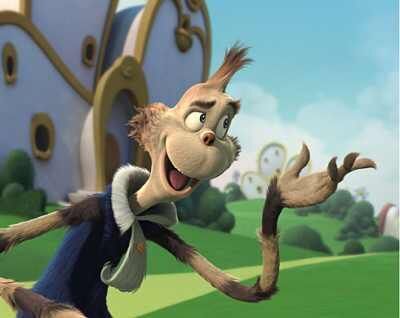 Bianca — March 23, 2008 — Pop Culture
References: youtube
Share on Facebook Share on Twitter Share on LinkedIn Share on Pinterest
When Dr. Seuss wrote his books, there was no hint of modern day technology. However, now that Hollywood has realized how hot the market is for movies based on these silly, rhyming classics, they're being recreated full of ultra-modern gadgets and brand cameos. The latest is Horton Hears a Who.

In one scene of the animated flick, the mayor's assistant is messing around the Whoville version of MySpace, aptly named WhoSpace.

In another scene, of the mayor's many daughters asked her dad for a WhoPhone because she was the only one in her class without one. Her dad tried to brush it off as exaggeration, but the little one whipped out a class photo in which all her little Who friends were blabbering on their cell phones, and she was left alone in the middle.

The most bizarre scene of all had to be the scene in which the computer graphics turned into basic anime, complete with Japanese, manga-style swear word bubbles and the characters blasting around the screen. There were the traditional sweat dreams they feature, crazy eyes, and Japanese cartoon facial expressions. It was very random. The entire audience, young and old seemed to be shocked and confused. I know manga is modern, but it really had no place in the film. Had it been just a three to five seconds, it would have been OK, but the scene was at least a minute long.

So, is this movie targeted at those who cherished the original book as a child, or toward a new generation of kids who are growing up with social networking sites and cell phones? The intention was probably to target both, but as I left the theater, several adults complained that their favourite novel had been destroyed by Hollywood.
3.9
Score
Popularity
Activity
Freshness
Get Better and Faster

23 Dr. Seuss Innovations
A Collection Inspired by the Birthday of Dr. Seuss