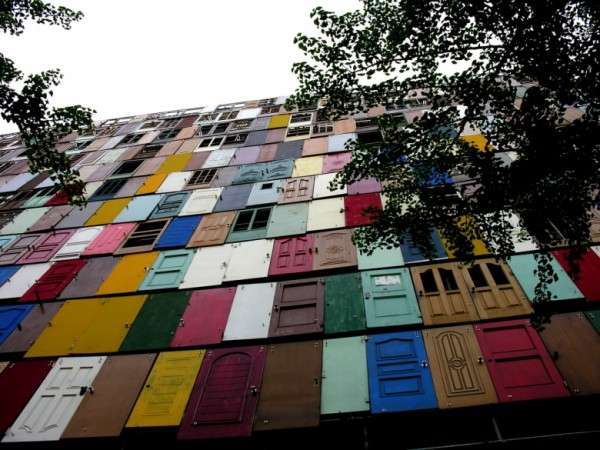 Choi Jeong-Hwa's10-Story Structure is Made Entirely Out of Entrances

Josh Mears — December 20, 2011 — World
References: thecreatorsproject & thisiscolossal
Who says a building can only be a building? South Korean Artist Choi Jeong-Hwa challenges your perception of a sky rise in busy downtown Seoul Korea. Choi Jeong-Hwa has taken over a 10-story high rise in downtown Seoul and turned it into his very own art project consisting of over 10,000 doors! The doors are stacked on top of each other to create a paneled affect similar to the glass traditionally seen on high rises.

This piece of artwork is truly awe inspiring and really does deserve a second look to fully immerse yourself in the magnitude of this project. Apparently what led Choi to this -- and other similar projects in which he shows off his artistic talent -- was his inability to draw and paint, prompting him to find an alternative method of releasing his talent; he chose to reinvent art as he knew it. Thank you Choi, it seems you really took the age-old saying to heart: when one door closes, another door opens.
3
Score
Popularity
Activity
Freshness