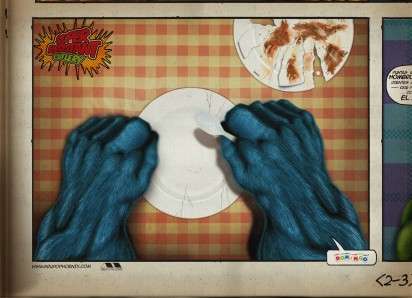 Meghan Young — April 30, 2013 — Art & Design
References: ibelieveinadv
Share on Facebook Share on Twitter Share on LinkedIn Share on Pinterest
The Domingo Disposables campaign uses pop culture to promote the brand's 'super resistent cutlery,' as the tag line states. Held in the hands of some of the comic book world's strongest mutants, which includes Beast from 'X-Men' and Thing from 'The Fantastic Four,' the images show that although the plates surrounding them are broken, the utensils manage to stay intact.

Conceived and executed by Pubblica, an ad agency based in Bogotá, Colombia, the Domingo Disposables campaign is made to appear as though it is a panel in a comic book. Art directed and illustrated by the multi-talented Christian Vanegas, the print ads were creative directed and copywritten by Ronald Bastidas Vélez. A small team for a big project, the message has been sent loud and clear.
0.9
Score
Popularity
Activity
Freshness
Attend Future Festival